Couch & Potatoes tells the tale of two TV-watching enthusiasts who pioneer a clever way to live on their couch until an unexpected event hurls them back into their youthful past. 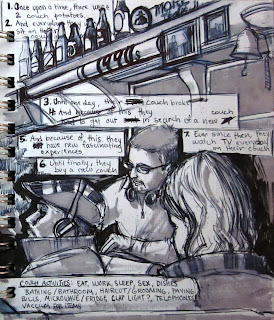 Production took place over the directors' summer and winter breaks; Lam and Jeong resourcefully designed and built each character, prop and set, developed the storyboards and artwork, and shot each scene in their apartments.

Through their efforts, Lam and Jeong hope to inspire other students and filmmakers to produce other stop-motion animations and explore more non-traditional mediums.

Couch & Potatoes is a claymation short created by Chris Lam and Eunsoo Jeong. It tells the tale of a couple who have literally engineered their lives around the couch in order to pursue a TV-enthusiastic lifestyle.